Jean was involved in helping select a group of the worlds greatest leaders (including Nelson Mandela) to be a part of The Elders (read more about them in the box below). 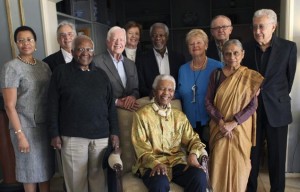 As I read more about the inception of The Elders, I learned that a strict criteria was used to ensure that only people of the highest caliber were selected for the group.

I personally love this set of criteria and they spoke to me in a way that called me to become the kind of person who could have been selected too.

I’m sharing them here with you in the hope that they will call you to becoming a greater version of yourself and do something truly great in your life.

Who are The Elders?

The Elders are a kind of political dream team, a dozen of the most widely respected world leaders alive today, whose glittering CV’s and unimpeachable commitment to human rights are supposed to open doors that would remain closed to less influential figures.

The group may well have the highest concentration of Nobel prize-winners in the world, with five of its 12 members recipients of the honor.

The idea is that they can exert influence and bring attention to humanitarian crises that might otherwise go unnoticed or unsolved. Between the 12 of them, they command access to an unrivaled network of leaders that, in theory, means that they can make a difference in contexts where other means like governmental interventions might have failed.

What Truly Great Leaders Have In Common…

Through a process of discussion and elimination, a set of criteria began to emerge for how to select prospective Elders.

Imagine what the world would look like if the leaders of the countries of the world displayed all these traits?

What would your life look like if you adopted some of these traits?

P.S. Another trait that emerged was that all the members of The Elders also had an extraordinary relationship with their spouse. I wrote about it here.

P.P.S. If you enjoyed reading this, please share it below and leave a comment below. I want to know what you think…