I ran over a dog last night.

It was dark and I was driving to the airport to collect two friends visiting me on the island. Out of the corner of my eye I saw a dog running across the freeway…

I slammed on my brakes, trying to keep the car from skidding out of control, but the dog kept running. Seconds later I felt a series of loud thuds followed by shrieks of terror and agony as the dog got dragged underneath my truck.

My heart started racing and time slowed down to a standstill as adrenaline pumped into my veins.

as I looked in the rear view mirror and saw the injured dog writhing in the middle of the freeway.

The dog’s agonized howls penetrated my car even though I had music playing, the windows were shut and I was 100 meters down the road.

I’m not proud to admit it, but my first thought was:

“There’s no way that this dog is going to be alive much longer… Another car will probably hit it again in a few seconds. I’m going to keep driving to the airport, pick up my friends and forget this ever happened…”

I kept driving for another 10 seconds, but the dog’s agonized howls haunted me like the sound of a baby crying for its mother.

I didn’t want to take responsibility for having hit the dog. By most people’s standards, the accident was the dog’s fault and that justifies leaving the dog to die on the side of the road.

I’ll come back to my story in a moment, but before I do, I want to ask you an important question:

Have you ever hurt someone, lied to someone or stolen something and then didn’t own up and take responsibility for it?

If your mind is telling you that you have never done a thing like that, it’s lying to you.

Think of that time when you hurt someone, lied to someone or stolen something and then didn’t own up and take responsibility for it…

Remember the guilty feeling immediately after you did the ‘bad’ thing? You knew you’d done something wrong.

Perhaps the memory of that event gnaws at you the way I could hear the howling dog yelping and see it writhing in the rear view mirror.

Consider for a moment that your “Howling Dog” is your conscience…

It’s your heart trying to tell you to do the right thing, the scary thing, the terrifying act of taking responsibility for your actions.

Think back to your incident again…

Remember how quickly your mind kicked in to shut your Howling Dog up and justify why it was OK not to take responsibility? That’s what our minds do in an attempt to keep us ‘safe’ or out of trouble.

Here’s the problem 99.9% of people don’t admit to themselves:

Whenever you hear or see your Howling Dog and you ignore it, it haunts you unconsciously and slowly, but surely eats away at your aliveness.

First, the guilt makes you tired and lethargic…

Then, as time passes, you forget that the incident ever happened BUT it leaves behind a slow-release poison that begins killing you from the inside out.

You begin feeling emotionally dead inside…

After a while, feeling dead becomes normal and life stops being a fun, joyful experience.

You LOSE the ability to attract good things into your life.

It’s as if your attraction magnet breaks down…

I know that you know what I’m talking about…

After years of silencing or killing your Howling Dogs (i.e. not taking responsibility for your actions and ignoring your conscience)…they KILL YOU – from the inside.

This often manifests as disease in your body or an inability to attract anything good into your life. It’s as if your life has become poisoned.

If you can relate to this, there is only ONE thing you can do to save yourself.

Take responsibility for your actions today. Otherwise, you’ll wake up tomorrow forgetting you ever read this email and you life will remain DEADENED.

I have a challenge for you today.

I challenge you to call the person you wronged and apologize to them and take responsibility for the impact of your actions.

I challenge you to own up to stealing, lying, cheating or whatever else you’ve done that you’re too scared to take responsibility for.

Start with just ONE thing. The BIGGEST thing. Clean that up first. You know exactly which one I’m talking about… It’s that BIG thing that you’re hiding, afraid someone might find out about.

Why would you want to do this?

Because it’s the only way to truly be FREE.

I fully expect that you won’t actually do what I suggest, because just the thought of it is going to scare the socks off you, BUT if you are up to the challenge then later on I will share a process you can use to clean up the mess seamlessly so you are free from all poisons in your life.

Here’s how I silenced my howling dog… 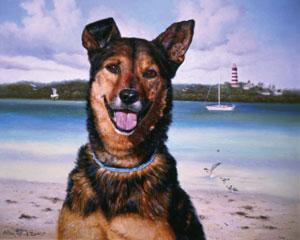 Somewhere in the middle of this, my heart managed to override my head and I turned the car around to go find the howling dog and take responsibility for hitting the poor little guy.

I was hoping that the dog would be dead by the time I arrived, because I had no idea what I’d do if it was still alive.

I had SO many thoughts, most of which were awful, wondering whether to leave it on the side of the road to die or not. I was so confused.

As I approached the place where I had hit the dog, I saw that the dog was still alive, panting with saliva running down its mouth and a trail of blood marking its agonizing journey dragging itself to the side of the road with its front paws only.

I jumped out of the car and slowly approached the now quiet dog, who looked at me with pleading eyes as if to say, “Please help me”. I could see it was probably a stray dog because it had no name tag.

I stroked its head to calm it down and then picked up the bloody dog in my arms and placed her gently in the back of the truck.

There was NO way in hell I was leaving her there and there was no turning back now.

This choice left me with two challenges:

I had to act fast because the dog might not live much longer and I wanted to do everything I could to help it.

I was 3 minutes from the airport, so I decided to collect my friends first and figure out what to do with the dog as I drove… Along the way I, called around and found a number of a vet on the island.

Arriving at the airport, I hugged Michelle and Schalk hello and welcomed them to the island, and explained that they needed to sit with their luggage on their laps because there was an animal in the back which needed our help.

15 minutes later we were pulling into the drive of the vet’s surgery.

The vet pinched the dog’s paws and to my surprise, she stayed calm and didn’t make a noise. I thought of how brave she was, only to have my illusion shattered when the vet told me that she was probably paralyzed and that’s why she didn’t react.

He told me he would give the dog painkillers for the night and talk to me in the morning. We agreed that if an owner did not claim the dog by the end of the next day, we would put the dog down.

I was all shaken up and it took me a few hours to calm down and relax after all the adrenaline. I felt sad, but peaceful about having done the right thing.

The vet called me the next morning and told me nobody had claimed the dog and it was most likely one of thousands of stray dogs on the island.

After much deliberation we agreed that the best thing for her was for her to die peacefully, rather than live out a life as a stray unable to walk. We chose to put her down. I felt sad, but when I felt into it putting her down was a lot less cruel that letting her struggle through life severely crippled in an environment that does not support stray dogs.

As I walked along the beach this morning, I thought of her and said a little prayer to thank her for the valuable beautiful lesson she taught me. I wished her well in “Doggie Heaven”, imagined her eating loads of big bones and running around freely on good legs and felt a sense of freedom again.

I’ll never forget the sound of that Howling Dog and it will always be reminding me to listen to my conscience, take responsibility for my actions and keep living as the best version of myself that I can.

I hope you choose to take me up on my challenge and take responsibility for something in your life that is eating at you. Be FREE from your howling dogs and experience peace and joy in your life.

Here is a process you can use for cleaning up ANY of your Howling Dogs in your life:

I dare you to take up the Howling Dog Challenge and then leave a comment below this article and let me know what you took responsibility for, what happened and how you feel afterward.

Bruce and Sammy (the name I gave my brave Howling Dog)

P.S. I want to acknowledge Werner Erhard, Brad Blanton and my Howling Dog for inspiring this article.

P.P.S. Take the Howling Dog challenge. It will set you free and allow you to attract BIG things into your life again.