Petr Muzik was an extraordinary man. He was my father, mentor, teacher and inspiration.

At the time of writing this post, he had just returned from fulfilling his life long dream – to sail around the world on his yacht, ‘Shoestring’.

My father passed away in 2015. This video is my tribute to him.

“If you’re going to do it, do it yesterday!” – Petr Muzik

Shipwrecked At Sea - A Tribute To My Dad

For many years, my dad had a goal of sailing around the world.

He built three yachts in our back yard as I was growing up. His last yacht, ‘Shoestring 3’, took him 15 years to build, between raising a family and running a business.

Some of his friends thought he would never set sail, but in 2005, my dad set to sea for what would become a three year epic journey that changed his life forever.

Tragedy struck one month out to sea when Roy, my step brother, was killed in a motorcycle accident. Dad turned around and sailed one month back to Cape Town for the funeral.

By the time he arrived back in Cape Town, he had to postpone his trip for yet another year as the trade winds had passed.

Having sold his house and car to go sailing around the globe, my Dad and his partner May, lived aboard Shoestring in Cape Town harbor until the trade winds returned one year later.

Undeterred, they left Cape Town for South America, traveled through the Panama Canal to the Pacific Ocean and on to New Zealand and Indonesia. From there, he crossed the Indian Ocean where his boat was shipwrecked in a coral atoll called Cocos Keeling. 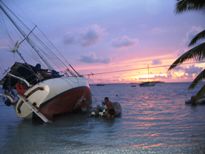 In the middle of the night, anchored in a small bay in paradise, the wind changed and threw Shoestring onto a coral reef. Water flooded the boat and Shoestring began to sink. Miraculously, there was a boat anchored nearby who had a generator and a pump (Shoestring’s pumps could not cope with the rate of water coming in) and came to the rescue.

During the shipwreck, the rudder had broken off and the propeller was so damaged that Petr had to cut it off with a hacksaw. Things were not looking good. Shoestring had sustained intense damage and was now left with a hole in the side of the boat, no propeller, no rudder and a bent keel!

Again undeterred, my dad pulled the boat into shallow water and waited for the tide to go out. He then had a 6 hour window in which to repair the holes in the hull. Amazingly, with the help of some fellow yachtsmen, they slowed the leaking down to a manageable level. Now, all they needed was a rudder and they could limp home across the Indian Ocean.

Miraculously, one of my Dad’s crew found an old catamaran rudder lying in a bush on the coral atoll!!! What are the chances? It was as if god had reached down and placed the rudder there just for Shoestring.

Dad attached the rudder to Shoestring and sailed for 30 days across the Indian Ocean, finally completing his amazing trip in December 2007. The sailing community put him on the cover of Sailing Magazine, acknowledging his accomplishment.

The moral of this story in the words of my father: “If you have a dream, just do it!”

“Second place us somewhere at the back” – Petr Muzik

Now that my Dad has passed and I’ve had time to reflect on his role in my life, I’m even more grateful for the role model he was to me.

He taught me that I can do anything I set my mind to.

I love you Dad. I miss you Dad. I will always be grateful for your presence in my life.