An open letter to anyone who considers themselves a leader:

Have you ever witnessed an injustice so unfair that you felt compelled to stand up and yell, “FOUL!!!”

Perhaps someone else got the credit for work you’d done. Perhaps you witnessed racial discrimination.

Yesterday, a close friend accused two of my mentors of being charlatans based on speculation they had read on the internet.

ME: “Seeing as you’re in Bali, maybe you can connect with Roger” (one of my mentors who lives in Bali)

HER: “Yeah… lots of scams going on with him…and there’s also a huge money scandal with Werner…” (another one of my mentors).

And what followed was a stupid power struggle with me defending my mentors and her defending her point of view saying “Where there’s smoke, there’s fire…”

I’m scared to think of where I’d be today were it not for the influence of the hundreds of hours these two men invested in my life – certainly not living my dream life running my business (as I am) from a beach on a Caribbean island.

So, I felt defensive and indignant that my friend would blindly believe something she read on the internet over my extensive first hand experience with these two great men.

The fact is, Roger has been accused of scamming people.

In 2009, one of Roger’s businesses went belly up, so its clients (including me – who paid $15,000 for a service) never got what they paid for. Later, a disgruntled ex-employee of this business decided to get revenge for being fired by slandering Roger all over the internet under numerous aliases.

As a result, if you google Roger’s name (and blindly believe what you read online), then you’ll be fooled into thinking he is a Class A charlatan.

In Roger’s defense, do you know of ANY successful entrepreneur who has never failed in business?

I once read that the average millionaire fails at 17 business business ventures before he becomes a millionaire.

Does that make him a scammer? Not in my books.

And what about Werner’s money scandal?

He was accused of tax fraud by the IRS 30 years ago. He sued the IRS, won the case and was exonerated. The IRS later admitted an error on their part.

Of course, the first part made headline news and the last part didn’t  so his reputation was already ruined in the public eye.

He sold his business (and his life’s work) so that his association with it wouldn’t negatively impact the important work his business is doing helping people.

And with the advent of the internet and Google’s algorithms controlling which websites make page 1 of the search results, Werner’s legacy is sill littered with misinformation, as evidenced by my friend reporting a 30+ year old scandal like it happened yesterday.

My point is this:

“Condemnation without investigation is the highest form of ignorance.” — Albert Einstein

Sometimes, where there’s smoke, there is fire…

And sometimes, where there’s smoke, there is just another person armed with a biased or misinformed opinion.

And sometimes, that person has a webpage that Google likes.

I once heard John DeMartini (one of the greatest philosophers currently alive IMO) say, “If you’re not being crucified, you’re not on purpose…”

It seems that every mentor who made a positive impact on my life has been accused of being a charlatan at one point or another.

So why is it that so many great men and women get rocks hurled at them and dragged off the pedestals that we erect for them? They can’t all be charlatans, can they?

…and nobody likes admitting that they may be living in mediocrity. Being mediocre requires no backbone, no commitment, no honor, no courage, no integrity and no self-leadership…

…and so it’s just easier to cut the tall poppy down.

I suspect that there is another reason why great leaders get crucified.

The minute you stand up for something you believe, you polarize yourself. 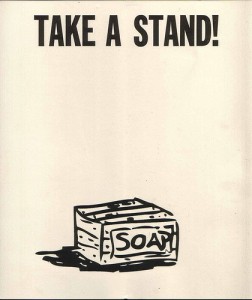 When you do that, you invite the criticism of people who are polarized to the opposite side of your cause.

And the greater the difference you are making, the louder they will shout from the rooftops.

While critics and naysayers have their place, don’t let their opinions influence your stand.

Instead, think for yourself.

And remember… if you’re not being crucified, then you’re probably not on purpose.

P.S. I’d greatly appreciate it if you left me a comment below.