2011 was a helluva year for me – certainly the most challenging one so far.

At the end of each year I look back and write a list of everything I learned that year… and 2011’s list was long.

So that someone other than me benefits from my mistakes, here are the most valuable 3 life lessons I learned in 2011.

It was 14 May 2011 and I’m in Las Vegas standing in the wings about to be introduced to the TEDxSinCity audience as their next keynote speaker.

I’m nervous and excited at the same time…

Nervous because this is the most important speech of my life so far and if I fuck it up, I’ll look really bad in front of some of my most respected peers – and the world (watching the event live over the internet).

One year earlier, when asked if I’d like to take responsibility for organizing and speaking at the event, I almost backed out of the opportunity of a lifetime – to have the honor to speak at a prestigious TEDx event and have my work impact thousands of people on the internet.

“I just don’t have the time to put into organizing that kind of event and writing a speech…” was the pathetic excuse I came up with.

The real truth was that the star studded lineup of speakers intimidated me. I felt out of my depth, unqualified to share the stage with world renowned authors, businessmen and even the mayor of Las Vegas. What could I possibly have to share with these successful people that they did not already know?

Over the years, I’ve learned a thing or two about fear: that when I feel scared about doing something that would be really good for me to do, that’s exactly when I need t take a deep breath and commit to doing the very thing that scares me. It’s never failed to turn out well.

So, I asked for a week to think about it. A week later, I committed to helping organize TEDxSinCity and speaking at the event.

So there I am… one year later in Las Vegas, standing in the wings being introduced to the TEDxSinCity audience as their next speaker. 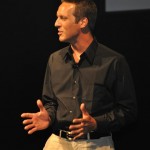 In my mind, I’m pretending that I am Neo (the hero from The Matrix movie), about to save the world with my speech.

5 minutes in, my nerves are calming down and the audience seems to be enjoying it…

10 minutes in, I see someone in the front row with tears in her eyes…

20 minutes in, the audience is standing up giving me a standing ovation…

2 weeks later, my talk is voted best talk of the event by the organizers…

2 months later, my talk is voted Editor’s Pick Of The Month on the TEDx website…

The lesson I learned: When I face my biggest fears, good things always happen

2011 was the year I learned to trust my gut wholeheartedly. Of course, being the stubborn ass I can be, it took several kicks in the ass before I learned this lesson…

After our divorce, my ex-wife wrote a book teaching women how to get over divorce in 21 days. So a few months back, she calls me and says,

“Would you mind being interviewed by a journalist about our divorce? It would really help me market my book and may get your work some publicity.”

A few weeks later, the journalist called me…

You know that feeling you get when somebody says something and you just know they are full of shit? Something about what they are saying feels ‘off’, but you can’t put your finger on why it feels ‘off’?

Well, I had that feeling back in November when the journalist called me up to “schedule” an interview with me about how we managed to divorce amicably without contest and still remain good friends after I had admitted to cheating on her multiple times.

During the 5 minute call, she asked me to clarify a few things about my divorce and then promptly ended the conversation saying “No need to schedule an interview… I’ve got what I need…”

During the surprisingly short ‘interview’, my gut was screaming “There’s something off with this woman… She’s hiding something…”

I didn’t listen to my gut and call her on the fact that she seemed happy to base my side of her story on a 5 minute chit chat, and that she must have spoken to my ex for an hour to get all the intimate details she seemed to know about our divorce… 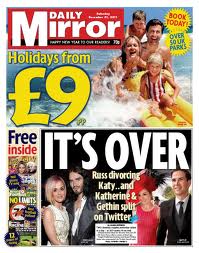 Six weeks later a dramatic one-sided article was published in the Daily Mirror newspaper in the UK that makes me out look like a sex-mad pervert and my ex-wife to be my innocent victim –  emerging the hero.

I was pissed… not only with the journalist, but at myself for not listening to my gut. I could have called the journalist out there and then (while I had her on the phone) and insisted that I get to approve the article before it is published, but I didn’t.

The lesson I learned: My gut knows when something is ‘off’ and I’m trusting it from now on. I’ve had this lesson  before, but this time it has finally sunk in my thick skull. As I have more experience trusting my inner guidance, I’m learning to distinguish my gut feeling from my passing thoughts and my fleeting emotions.

LIFE LESSON #3: Anything That Appears To Be ‘Not Love’ Is A Misunderstanding

If you’ve read any of my blog posts on relationships this year, you’ll remember the heartbreak I went through when my lover left me to be with my best friend… then we got back together months later… and then broke up again when she moved countries.

I pretty much spent 6 months grieving, crying myself asleep each night as I came to terms with the fact that I had lost the only woman I had ever truly loved. It was a deeply humbling experience.

My friends, concerned about my well-being, advised me to do whatever it took to forget her, but I didn’t know how to… and to be honest I didn’t want to. I loved her too damn much.

Eventually, I jumped on an airplane and went to see her.

We hung out and spoke together all week.

I learned that she ran away because she was terrified of feeling stuck in a relationship where she didn’t feel like she could be herself.

That hit me like a ton of bricks. How had I not seen that before?

She learned that my neediness was not me trying to trap her, but a reaction to my worst childhood fear of being abandoned.

The more we shared, the more we realized that each of our “hostile” actions could be understood (and even loved) by the other when we stood in each others shoes with a commitment to understanding, empathizing and validating their side of the story.

I flew back home to the Dominican Republic, still without any idea whether or not she would change her mind, but at least I had shown her that I was not giving up on us and she got to experience that her fear that she could not be herself with me (and still feel accepted) was unfounded.

A week passed before she called me up and shared that she was still in love with me and finally ready so commit to sharing her life and love with me.

As wonderful as this news was to me, there’s a more important distinction at play here: Reuniting would never have been possible had we both not made the concerted effort to step into each others shoes, discover the misunderstandings that caused the break in our connection and resolve them.

I am proud (and relieved) to say that round 3 of our relationship is nothing like rounds 1 and 2. I plan to make sure that there isn’t a round 4, but even if there is, I know it will grow us both…

We’ve both worked really hard on ourselves to get to the point where we are now – in love, deeply connected, and grateful for all the pain that got us here – even though we live in different countries for now.

The lessons I learned:

It’s my hope that by reading this you can relate some of what I’ve learned to your own life.

Is there a fear you know you are avoiding facing?

Is your gut screaming at you and you’re not listening to it?

Are you making someone you love wrong?

There’s no better time than NOW to do something about it. It may scare the crap out of you, but it will ensure that 2012 is not a repetition of the painful parts of 2011.

P.S. Please leave me a comment below and let me know what you learned. I read them all…